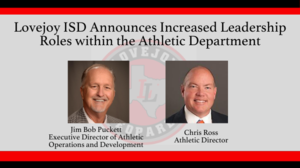 
Lovejoy ISD is pleased to announce the expansion of two key leadership roles within the Athletic Department. Coach Chris Ross has been named as the Lovejoy ISD Athletic Director, and Coach Jim Bob Puckett has been named the Executive Director of Athletic Operations and Development.


As the Executive Director of Athletic Operations and Development, Coach Puckett will oversee operations, construction, and maintenance related to all athletic facilities, secure athletic corporate sponsorships, and serve as the Director of the Athletic Hall of Honor and Leopard Athletic Alumni Association.


Lovejoy ISD Superintendent Dr. Michael Goddard stated, “Coach Ross and Coach Puckett are a dynamic team. They have surrounded themselves with excellent coaches and coordinators who have created exceptional programs. The ability of these two to focus on these specific roles will take the Lovejoy ISD athletic program to new levels of accomplishment.”