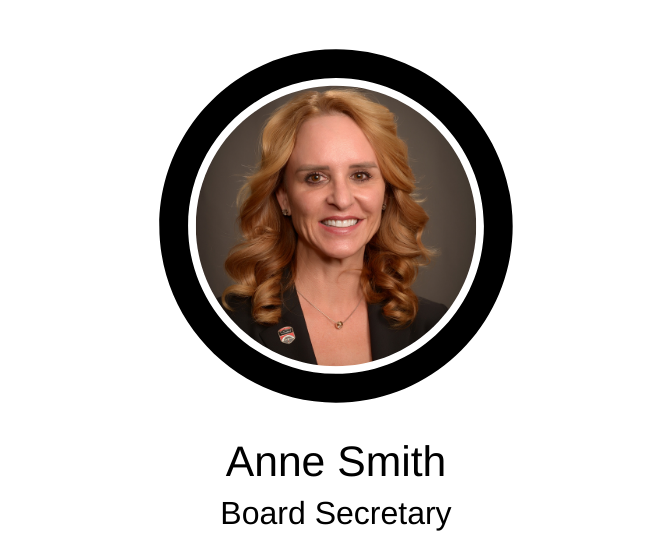 Anne Smith was elected to serve on the Board of Trustees in May 2017. Currently, Ms. Smith serves as Lovejoy ISD Board Secretary. She spent her first three years on the board also serving as Ex-Officio for the Foundation for Lovejoy Schools and board member for the Allen/Fairview Chamber of Commerce. Anne makes it a priority to attend district functions as often as possible to show her support for students, teachers and staff.

Prior to being elected, Anne served on the board for the Foundation for Lovejoy Schools raising $186,785 as Annual Appeal Chair in 2016. She has worked in various capacities for the Denim and Diamonds Gala and Auction, including serving as kick-off party chair, member of solicitation and sponsorship committees, and campus liaison.

Ms. Smith served as PTA President at Sloan Creek Intermediate for two years, as well as PTA President at Lovejoy Elementary for two years. In 2016, she was honored with the PTA Lifetime Award. Ms. Smith has served on the Council of PTAs as Programs Chair, Legislative Chair and is the current Citizenship Chair. After being elected to the school board, Anne continued to serve Sloan Creek and Willow Springs PTA boards in legislative and environmental roles. She currently is the legislative representative for the Lovejoy High School PTSA. She is a graduate of the 2014 Leadership Lovejoy Class, and has served on the Lovejoy Finance Committee and District of Innovation Committee.

“I chose to run for school board because I believe in Lovejoy and want the district to continue to be an exceptional place where all students are inspired to grow and develop to their greatest potential. I am confident that my enthusiasm and experience as a board member makes a difference in our community. I take my role seriously and do my best to love and support all the students in our district as if they were my own.”

Anne also serves with her son in the Lovejoy Chapter of the Young Men’s Service League. She has served in various leadership and volunteer roles in the Junior Leagues of Durham and Orange Counties and the Junior League of Collin County. In her free time, she enjoys traveling with her family, spending time with her two dogs and playing competitive tennis.

Growing up, Ms. Smith lived in various parts of the country including Chapel Hill, North Carolina, Kansas City and The Woodlands, Texas, before attending Texas Tech University where she earned a bachelor of arts in public relations with a minor in marketing. She worked for ten years in technology and pharmaceutical sales prior to her full-time job as volunteer and stay-at-home mom. She and her husband, Ryan, have been married for 20 years and have called Lucas home since 2011.  They have a son and a daughter who attend school in Lovejoy ISD.