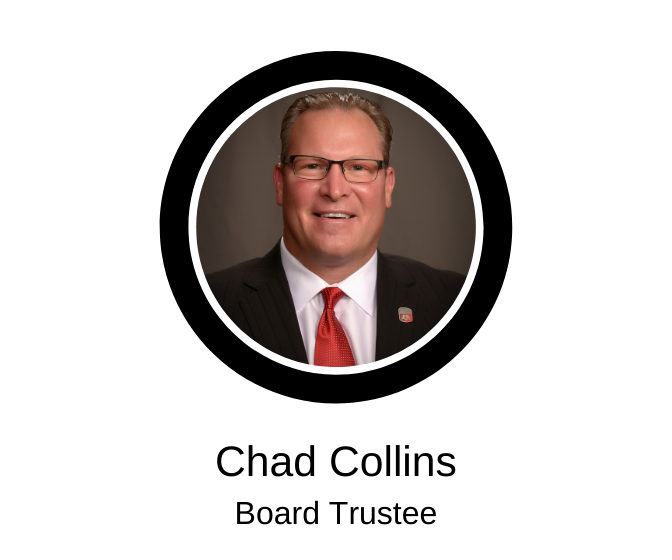 Chad Collins began his Board service in 2010. In 2011 he was elected to serve as the Secretary of the Board and served as the President of the Board from 2016 - 2021. Mr. Collins is an alumnus of Lovejoy Elementary and graduated from Allen High School in 1992.  He received a bachelor’s of business administration degree from Texas Tech University, earned an M.B.A. in general management from Cornell University, and attended multiple executive education programs at Harvard Business School.  Mr. Collins has spent the majority of his career in the healthcare field in biotech and pharmaceutical, medical device, and pharmacy verticals in a number of functional and executive roles while living in New York, New Jersey, Missouri, and Texas.  He is currently the U.S. Vice President of Sales of a global biopharmaceutical company.

Mr. Collins is a former Vice President of the Foundation for Lovejoy Schools.  He is a Texas PTA Honorary Lifetime Member and is a past President of the former Hart Elementary Dad’s Club.  Mr. Collins has also volunteered for decades as a coach in youth sports beginning in 1998.

As a leader in school board business and operations, Mr. Collins has spent significant time meeting with Texas legislatures and lobbying on behalf of public education and Lovejoy ISD in Austin, while also collaborating with other school districts.  Time at the state capitol of Texas has also included providing public education committee testimony.

“I joined the Lovejoy ISD School Board because I want to assist in the growth and development of a district that is focused on setting the standard in public education,” notes Mr. Collins.  “I believe that accountability, transparency, and collaboration are cornerstones to being a Trustee in Lovejoy ISD.  And, I believe in pursuing the best opportunities for all our students to reach their potential.”

Mr. Collins was raised in Lucas, Texas, and after working around the country returned with his family in 2007.  He and his wife Kelly have been married for 22 years and have three children in the district.