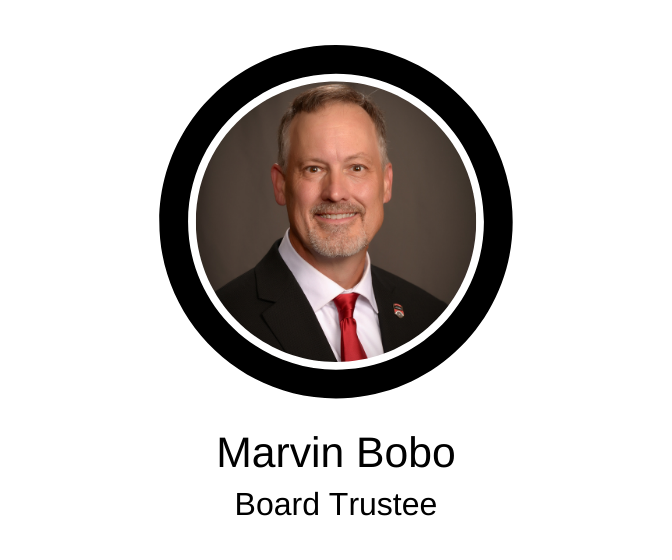 Marvin Bobo was elected to the Board of Trustees in 2020.

Mr. Bobo and family moved to Lovejoy in 2005 after owning property here since 1995.  Starting that first year Mr. Bobo volunteered across many areas of Lovejoy ISD with district-wide initiatives.   He is an unapologetic advocate for Lovejoy ISD.  Much of the history of Lovejoy was lived by Marvin and now he is ready for the next 15 years of service starting with his service on the board.

Mr. Bobo also volunteers for his church, scouting, sports and other community activities.

He received a bachelor’s of business administration degree from Abilene Christian University, earned an M.B.A. from Southern Methodist University, and attended multiple training programs in management and technology.  Mr. Bobo has spent the majority of his career in technology in functional and management roles across many different companies including supply chain, finance, retail, healthcare and software.  He currently manages a real estate investment company and other investments.

“I joined the Lovejoy ISD School Board because I want to be a bridge from the past to the future as I have been active in this great community for many years.  I want to preserve and sharpen the best of Lovejoy that is focused on creating well rounded graduates equipped for a future wherever it takes them.  Lovejoy is a priceless gem and it deserves the same care as any quality gem.”

Mr. Bobo was raised in San Antonio, Texas, and started his career in Dallas eventually settling in Lucas in 2005.  He has been married to Alysia for 29 years and has 3 sons.  His wife, Alysia has also been a volunteer in the district as well through PTA, Foundation, and various other Lovejoy boards.  His oldest is a Lovejoy grad and is pursuing his master’s degree at Baylor.  His middle is currently a sophomore at Lovejoy High School and his youngest is in 3rd grade at Hart.