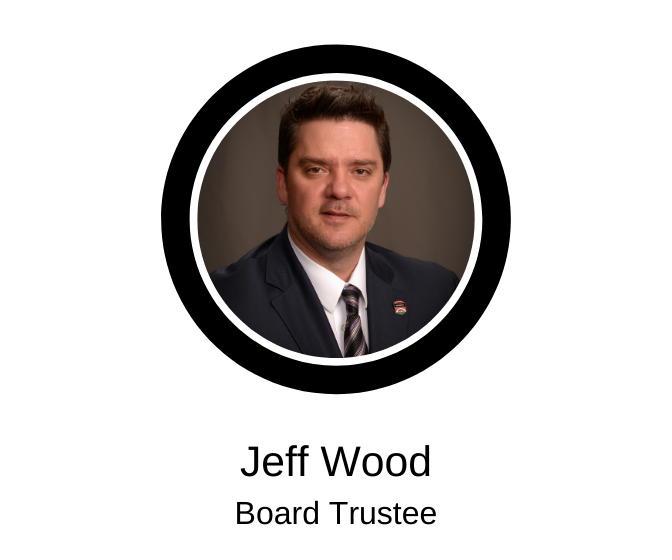 Jeff Wood was appointed to the Lovejoy Board of Trustees, Position 3 on August 24, 2020.  He received a bachelors of business administration from Baylor University in 1997, and a juris doctorate from Texas Tech University School of Law in December of 1999.  Mr. Wood was licensed to practice law in Texas in May of 2000, and has been practicing primarily in the area of civil litigation for 20 years.  He is currently a partner at the Dallas based law firm of Steed, Dunnill, Reynolds, Bailey, Stephenson L.L.P.  He was formerly an equity shareholder at Jones Carr McGoldrick L.L.P.

Mr. Wood and his family have lived in Lucas and supported Lovejoy since 2010.  He has 3 children in the district: Jack- a 10th grader at Lovejoy High School; Parker- an 8th grader at Willow Springs Middle School, and Elizabeth- a 5th grader at Sloan Creek Intermediate School.

Mr. Wood has served on the board of directors for The Foundation for Lovejoy Schools since 2017, serving as the chair of the governance committee and also serving on the Men’s Tailgate committee.  He has served as the WSMS Committee Chair for the Lovejoy Gridiron Club and served as Game Day Volunteer Coordinator for WSMS games 2017-2018, and freshman games in 2019.  He served on the Naming Rights/ Sponsorship Advisory Committee to the Lovejoy ISD Board of Trustees in 2018.  In 2017, Mr. Wood answered the call to action to lobby on behalf of Lovejoy ISD during the 85th Texas Legislature Special Session to press state legislators for meaningful school finance reform in the face of a disturbing downward trend of state funding, and the resulting increased reliance on local tax revenue sources.  Unfortunately, the proposed bill to overhaul public school finance was not passed in 2017. However, and with assistance from newly elected legislators, those efforts did eventually lead to the passage of HB 3 in 2019, which was a significant step forward in increasing state funds for all Lovejoy students, decreasing the disproportionate reliance on local taxes, and dramatically altering the impact of “recapture” funds that school districts such as Lovejoy were required to return to the state.

From 2010 through 2019, Mr. Wood served as a volunteer youth sports coach for Lovejoy students in organized, seasonal competitions including baseball, basketball, and both tackle and flag football.  He also served as a volunteer coach for the 2023 and/or 2025 Lovejoy 7on7 teams between 2014 and 2019 in regional and state tournaments.

“I am excited and truly humbled to have the opportunity to serve our community as a member of the Lovejoy Board of Trustees during these unprecedented and challenging times. I understand that the true greatness of Lovejoy is found in the people who live, work and go to school within the district, and that behind every success, there are a great many people working together, sometimes behind the scenes, who contribute to that success. I am committed to supporting all the administrators, faculty, students, parents and volunteers that make Lovejoy such a special place.”